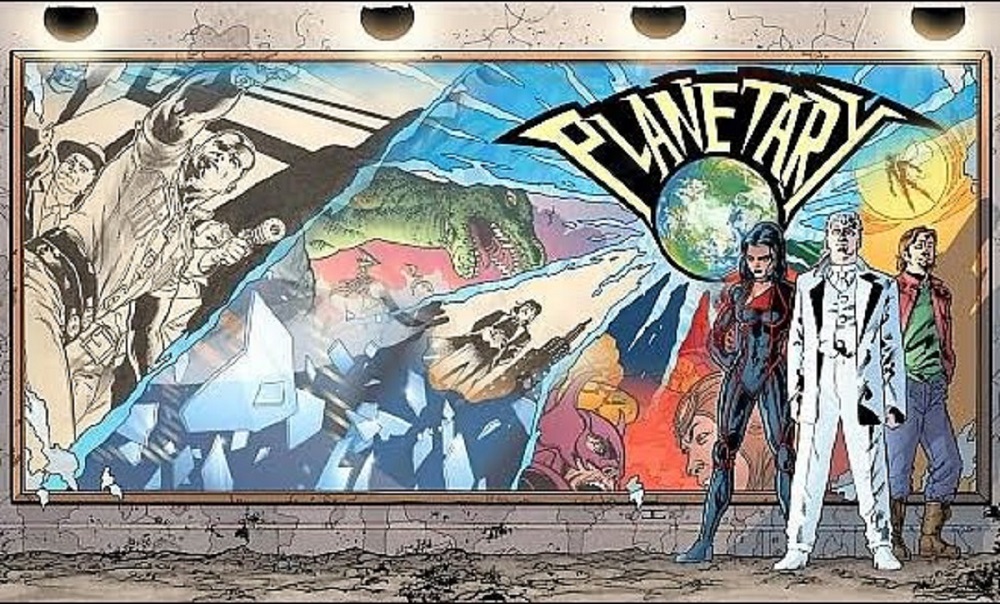 When a friend pressed volume one collection of the Warren Ellis / John Cassaday / Laura Martin series Planetary, I didn’t know what secrets of the hidden world I was about to discover. Ghost detectives, kaiju, hidden cities, and every other genre from the pulp to the present got a nod and Ellis wove them together in a tale akin to Phillip Jose Farmer’s World Newton Family but even grander is scope.

A handful of references place it firmly within the Wildstorm universe but all the action is going on under the skin, but Ellis doesn’t stop there for his inspirations. Within a handful of panels we see entire worlds come to life – a secret history of super scientists and two fisted adventurers, a re-imagined Justice League reduced to a handful of familiar artifacts, the shadowy mystic defenders attending the funeral of a trench coast wearing trickster, and lore that is familiar and strange at the same time. I’d compare it to reading Alan Moore’s various comic book deconstructions (League of Extraordinary Gentleman treating the fictional and factual history as all real as an example)  or Jeff Lemire’s Black Hammer’s reimagined world of superheroes.  And yet, even with numerous superhumans running about, this isn’t a super hero comic.

The lore of these hidden worlds unfold for us as we follow Elijah Snow and his fellow “Archeologists of the Impossible” (a term from the comic itself, echoing the Fantastic Four being called “Imaginauts”) explore and protect the strange world that underlies the one that everyone else knows. As the story jumps from one genre to the next, the art of John Cassaday pays homage to the source material in style and feel. Most of the issues are largely self contained with bits of the overarching puzzle coming together, the final run of issues putting these pieces together and changing from investigation to one of action and retribution.

Overall, I’d call Planetary presented as a tribute in tone and skillful in pulling together diverse stories and tying them together in a way that is seldom seen (Earth X written by Jim Krueger and Alex Ross, Marvels by Kurt Busiek, both excellent examples of pulling together storylines embedded in the foundation of the Marvel universe and still giving them new meaning in how they relate to each other).

If I were to find fault with this series, it would be with some of the crossovers with other titles (which honestly felt like an editorial choice) and that the finale didn’t manage to hit the same heights of fantastical. There are definite themes that Ellis brings with him, many found in his run of Stormwatch / The Authority (essentially running alongside this series) and he gets to namedrop places and people between them. Still, I regularly return to re-reading my TDB collections and even have a second set for pressing into the hands of others …

For the Gamer Eye
If you are looking to build a super hero history, Planetary ranks right up there with the shared world of Wild Cards. FATE would probably be a good system for this world of super scientists and pulp heroes (Atomic Robo anyone?) as the narrative is more important than the mechanics (Mutants & Masterminds is my other go to for super hero games, taking the best of Champions and DC Heroes IMHO).