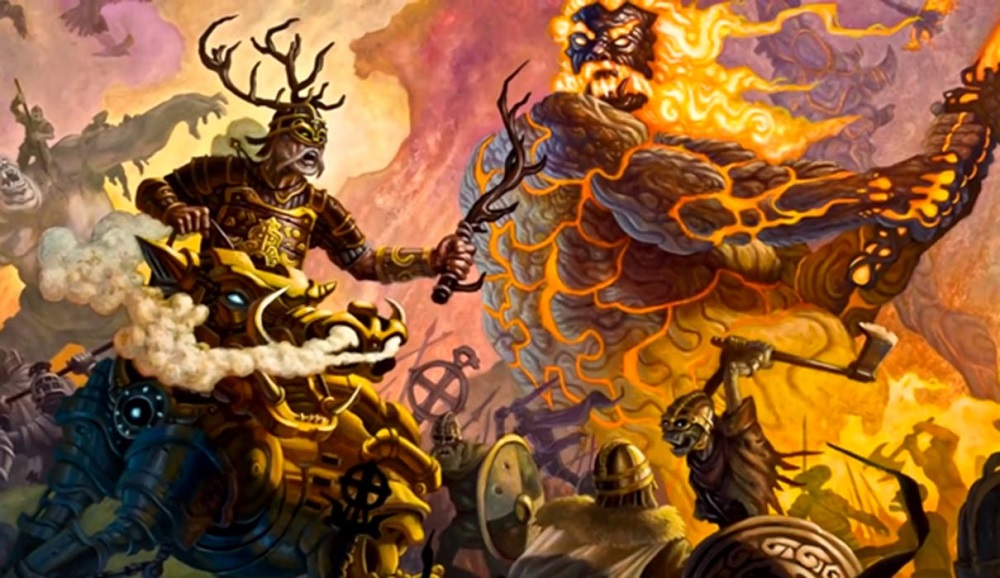 World Building – Death of the Gods

TLDR – Kill the gods of your world for interesting roleplay and story possibilities. Give it a hook that makes it significant to the Player Characters but don’t limit them too harshly.

Several traditional mythologies feature a battle royal between the gods and the epic forces of destruction. It might be a generational struggle like the Olympians against the Titans (titanomachy) that resolves itself with a victory by the new generation and a break in the cycle that brings order and the rule of law into a society that once was governed by more primal forces, reflected in an increased sophistication in the Olympians who still held most of the portfolios of powers of the primordial Titans who came before them. It could be a battle against the end of the world itself like the Norse Ragnarok that wipes out almost all the gods but ushers in a new age. Some mythologies describe a more cyclic rotation of ages, from chaos to order and gods reborn to new forms that reflect those eras. For a table top RPG, these sound like pretty great starting points for a campaign story.

If you happen to play in the current default D&D setting of the Forgotten Realms, the death of gods is a pretty frequent occurrence. Some return (Helm), some are believed to be reborn as new incarnations (Lathandar / Amaunator, or that Mystra gets reincarnated every time that a cataclysm happens …). Others scurry about as Avatars seeking a return to godhood like the Dead Three. Leira, goddess of illusions was supposedly killed by Cyric, but eventually is revealed to not be dead, generating conflicting beliefs as to if she had faked her death (as followers of Leira claim), was killed and her powers gained by Cyrics (as some followers of Cyric claim, or that she was in fact the daughter of Cyric (which could be a new truth, and old truth now revealed, or just another misdirection from the goddess). Tyche as a goddess of all fortune was cursed then struck down by her fellow gods only to have two new gods arise from her death who split Tyche’s portfolio into Tymora (good fortune) and Beshaba (misfortune). The lore as written literally supports religious factions arguing about it, yet the spells continue to be granted and the gods aren’t revealing their secrets to mortals on it.

That’s a lot to unpack and it’s only a single setting.

From a purely metafiction view, edition changes called for world altering events and the death or transformation of the gods and the cosmology is about as world altering as it gets. It might occur off stage in the distant past or even twenty years prior to set the scene. It might be something about to happen if the Heroes do not complete the quest before them. It could even be what’s happening right now and creating all manner of chaos as the battle spills into the physical realm.* The important thing is to focus on HOW THIS AFFECTS THE PLAYER CHARACTERS. Whether it is lore discovered in a dusty tome or a cleric who must contend with the death / disappearance of their deity, if it doesn’t hook into the PC somehow then it really doesn’t impact your game.

As a Gamemaster, a couple of examples come to mind for dealing with PC spell casters or other followers, taking inspiration from mythologies and various fantasy novels:

Even if playing in a pre-written world, it becomes your world through play.

What are some of the more interesting deaths of gods that you’ve had at your table?

*I was once in a game which took place in the immediate aftermath of a god war. A major city had been cut in two by a god sword, leaving a massive crevice dividing the city, or as our DM called it – a pit of adventure! Meanwhile we were discovering how the outcomes of the war impacted the clerics …